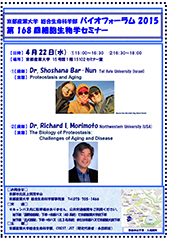 The recognition that aging is genetically regulated makes yeast (Saccharomyces cerevisiae) an attractive model for aging studies. Yeast’s aging is fast, the genome is easily manipulated and longevity genes are conserved. Aging rate is usually deduced from lifespan measurements, but cells and organisms may die from causes unrelated to aging. We have identified two novel readouts for yeast aging that do not rely on lifespan: (1) Aggregation of a polyQ protein with a mid-size poly-glutamine tract (47Q). (2) Decline in 3 pathways of the proteostasis network - the endoplasmic reticulum (ER)-associated degradation (ERAD), the unfolded protein response (UPR) and the response of the major stress-responding transcription factor Hsf1 to heat shock, (HSR). We have shown that the extended lifespan upon transferring yeast to pure water, a known phenomenon, is the outcome of slowing the rate of the aging process, as yeast retains characteristics of young cells. The 47Q aggregates slower and to a lower extent, and ERAD, UPR and HSR are maintained in yeast upon water-transfer.
Deteriorated stress response is one of the hallmarks of aging and as a unicellular organism, yeast has evolved impressive systems to robustly respond to environmental challenges. This response is orchestrated largely by the conserved transcription factor Hsf1, which in S. cerevisiae regulates expression of multiple genes in response to diverse stresses. To follow Hsf1 activity along S. cerevisiae chronological aging, we monitored expression of three reporters in response to three stresses. We found that Hsf1 response to heat shock (HSR) and oxidative stress deteriorated progressively with aging and was completely lost in old yeast. However, Hsf1 activation by sugar starvation was preserved in old cells. Overexpressing Hsf1 did not significantly improve the heat shock response, indicating that age-dependent Hsf1 dwindling was not the major cause for Hsf1 attenuated response. Rather, factors that participate in Hsf1 activation appeared to be compromised by aging. We uncovered two factors, Yap1 and Sir2, which discretely functioned in Hsf1 activation by oxidative stress and heat shock. In ・yap1 mutant, Hsf1 did not respond to oxidative stress, while in ・sir2 mutant, Hsf1 did not respond to heat shock. Moreover, excess Sir2 mimicked the heat shock response. This role of the NAD+-dependent Sir2 was supported by our finding that supplementing NAD+ precursors improved Hsf1 heat shock response in old yeast, especially when combined with expression of excess Sir2. The combination of excess Hsf1 excess Sir2 and NAD+ precursors rejuvenated the heat shock response in old yeast.
Finally, the HSR in the cytosol and the UPR in the ER are two major pathways of the cellular proteostasis network. In S. cerevisiae, HSR is regulated by Hsf1, and UPR Ire1 branch activates transcription factor Hac1. We discovered systemic regulation of proteostasis through a direct link between UPR and HSR. Hsf1 was activated by UPR and its HSR depended on intact UPR. This link was mediated by Sir2, which was not only essential for Hsf1 HSR but was also required for Hsf1 activation by UPR. Excess Sir2 augmented Hsf1 activation by UPR and could compensate for its impairment in UPR-defective strains. Sir2 protein was upregulated by UPR but, in turn, it also attenuated this pathway, ensuring that UPR functions only transiently.

The Biology of Proteostasis: Challenges of Aging and Disease

The health of the proteome is essential for life, which at the cellular level is orchestrated by the proteostasis network (PN) to regulate the flux of protein biogenesis from birth to death. The PN accomplishes this through the concerted activities of molecular chaperones, ubiquitin-dependent proteasomes, and autophagy pathways that are regulated primarily by the heat shock (HSR), organellar unfolded protein (UPR), and metabolic (FOXO) stress responses. Under conditions of optimal quality control as occurs during development, misfolding and aggregation are effectively suppressed even when challenged by expressed genetic polymorphisms, error-prone synthesis, and the effects of stress. However, in early adulthood the protective mechanisms for somatic tissues are blunted by signals from the germline stem cells, resulting in the collapse of proteostasis as animals attain reproductive maturity. In humans, we have also observed a decline in chaperone expression in human brain aging that is accelerated in brain tissues from patients with Alzheimer’s disease (AD), Huntington’s disease (HD), and Parkinson’s disease. By testing the functionality of the chaperome in human tissue culture models for (HD) and in C. elegans models for AD and HD, we identified the core-sub chaperome that are essential to prevent aggregation and toxicity and declines in brain aging. These observations lead us to propose that organismal proteostasis represents the balance and coordination among multiple cell stress responses to ensure cellular and tissue health and longevity.