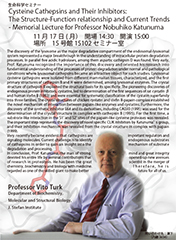 The discovery of the lysosome as the major degradative compartment of the endosomal-lysosomal system represented a major breakthrough in the understanding of intracellular protein degradation processes. In parallel five acidic hydrolases, among them aspartic cathepsin D was found. Very early, Prof. Katunuma recognized the importance of this discovery and oriented his research into fundamental understanding of the processes of protein degradation under normal and pathological conditions where lysosomal cathepsins became an attractive object for such studies. Lysosomal cysteine cathepsins were isolated from different mammalian tissues, characterized, and the first primary structures of cathepsin B and H were determined, among lysosomal enzymes. The crystal structure of cathepsin B explained the structural basis for its specificity. The pioneering discoveries of endogenous protein inhibitors, cystatins, led to determination of the first sequences of rat cystatin βand human stefin B (1983) and were essential for systematic classification of the cystatin superfamily into three families. The crystal structures of chicken cystatin and stefin B-papain complex established the novel mechanism of interaction between papain-like enzymes and cystatins. Furthermore, the discovery of the synthetic inhibitor E64 and its derivatives, including CA030 (1991) was used for the determination of the crystal structure in complex with cathepsin B (1995). For the first time, a substrate-like interaction in the S1’ and S2’ sites of the papain-like cysteine proteases was revealed. The important step represents the discovery of novel specific CLIK inhibitors by Katunuma’ s group, and their inhibition mechanism was revealed from the crystal structure in complex with papain (1999).
Very recently became evident that cathepsins are important regulators and signaling molecules. Current challenge is to identify endogenous substrates of cathepsins in order to gain an insight into the mechanism of substrate degradation and processing.In conclusion, Prof. Katunuma, the man of strong mind and great integrity devoted his entire life by seminal contributions that opened-up new avenues of research in proteolysis. He has been the great scientist in the merger of chemistry, biochemistry and biology with medicine. There fo re , heis regarded as one of the skilled giant to make better future for all of us.