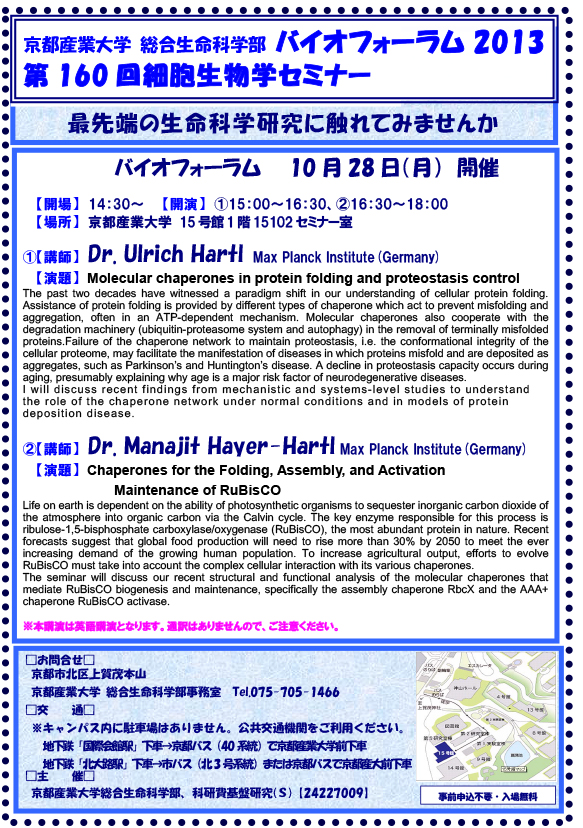 The past two decades have witnessed a paradigm shift in our understanding of cellular protein folding. Assistance of protein folding is provided by different types of chaperone which act to prevent misfolding and aggregation, often in an ATP-dependent mechanism. Molecular chaperones also cooperate with the degradation machinery (ubiquitin-proteasome system and autophagy) in the removal of terminally misfolded proteins.Failure of the chaperone network to maintain proteostasis, i.e. the conformational integrity of the cellular proteome, may facilitate the manifestation of diseases in which proteins misfold and are deposited as aggregates, such as Parkinson’s and Huntington’s disease. A decline in proteostasis capacity occurs during aging, presumably explaining why age is a major risk factor of neurodegenerative diseases.
I will discuss recent findings from mechanistic and systems-level studies to understand the role of the chaperone network under normal conditions and in models of protein deposition disease.

2.【演題】 Chaperones for the Folding, Assembly, and Activation
Maintenance of RuBisCO

Life on earth is dependent on the ability of photosynthetic organisms to sequester inorganic carbon dioxide of the atmosphere into organic carbon via the Calvin cycle. The key enzyme responsible for this process is ribulose-1,5-bisphosphate carboxylase/oxygenase (RuBisCO), the most abundant protein in nature. Recent forecasts suggest that global food production will need to rise more than 30% by 2050 to meet the ever increasing demand of the growing human population. To increase agricultural output, efforts to evolve RuBisCO must take into account the complex cellular interaction with its various chaperones.
The seminar will discuss our recent structural and functional analysis of the molecular chaperones that mediate RuBisCO biogenesis and maintenance, specifically the assembly chaperone RbcX and the AAA+ chaperone RuBisCO activase.