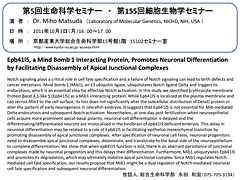 Notch signaling plays a critical role in cell fate specification and a failure of Notch signaling can lead to birth defects and cancer metastasis. Mind bomb 1 (Mib1), an E3 ubiquitin ligase, ubiquitylates Notch ligand Delta and triggers its endocytosis, which is an essential step for effective Notch activation. In this study we identified Erythrocyte membrane Protein Band 4.1-like 5 (Epb41l5) as a Mib1 interacting protein. While Epb41l5 is localized at the plasma membrane and can recruit Mib1 to the cell surface, its loss does not significantly alter the subcellular distribution of DetaD protein or alter the pattern of early neurogenesis in zebrafish embryos. It suggests that Epb41l5 is not essential for Mib-mediated Delta endocytosis and subsequent Notch activation. Nevertheless, at one-day post fertilization when neuroepithelial cells acquire more prominent apical-basal polarity, neuronal cell differentiation is delayed and the differentiating/differentiated neurons are mislocalized in the hindbrain of epb41l5 deficient embryos. This delay in neuronal differentiation may be related to a role of Epb41l5 in facilitating epithelial-mesenchymal transition by promoting disassembly of apical junctional complexes. After specification of neuronal cell fates, neuronal progenitors need to disassemble apical junctional complexes, delaminate, and translocate to the basal side of the neuroepithelium to complete differentiation. We show that when epb41l5 function is lost, there is an aberrant persistence of junctional complexes made by neuronal progenitors and this delays their differentiation. Furthermore, Mib1 ubiquitylates Epb41l5 and promotes its degradation, which may ultimately stabilize apical junctional complex. Since Mib1 regulates Notchmediated cell fate specification, our results propose that Mib1 might be a dual regulator of Notch-mediated neuronal cell fate specification and subsequent neuronal differentiation.