On February 1st 2021, the military in Myanmar staged a coup, arresting both the President, Win Myint, and State Councillor, Aung San Suu Kyi. In the months since then, public demonstrations have been widespread, often resulting in a violent military response. On May 21st, Irrawaddy News stated that 810 people had been killed since the coup began.

In response to the 2021 coup, many in the international community have been calling for sanctions. This is often an ‘easy option’ for states and other institutions that have no interests in Myanmar. Leaders can ‘virtue signal’ and appease vocal civil society organizations. For example, Mekong Watch, a Japan-based NGO, called for the immediate suspension of all Japanese ODA to Myanmar. However, do such moves actually help the people of Myanmar?

Well, this is a very difficult question to answer. The purpose of sanctions is to force another state to follow your will. This is obviously extremely difficult. Therefore, sanctions often do not work. The leaders of states being sanctioned are usually able to protect themselves from the economic pain which is the purpose of the sanctions. The impact of the sanctions therefore hits the citizens.

Back in 1990, the military carried out a similar coup in response to the overwhelming victory of the National League for Democracy in the elections of that year. Thousands of protestors were killed, and the international community responded with sanctions. These sanctions became broader and deeper over the next twenty years. The primary victims were the citizens. For example, because of the sanctions, Myanmar was not able to receive aid from the Global Fund to Fight AIDS, Tuberculosis and Malaria, and this was despite the fact that Myanmar had the highest number of Malaria deaths in Southeast Asia.

Apart from the terrible impact on the population of Myanmar, the sanctions also pushed Myanmar towards China. Essentially, Myanmar had no choice because other states would not provide any assistance. This was a major concern for many people in Myanmar, and for many people in the region. In fact, it is likely that the increased dependence on China was one of the main reasons why the military began the transition ten years ago. The military wanted to ‘open-up’ to the international community and reduce its dependence on China.

The situation in Myanmar is a serious challenge for the international community. Should we totally cut off all aid and cooperation with the military in Myanmar? Or should we try diplomacy? Myanmar is a very good case study of how states interact with one another- this is the essence of International Relations. 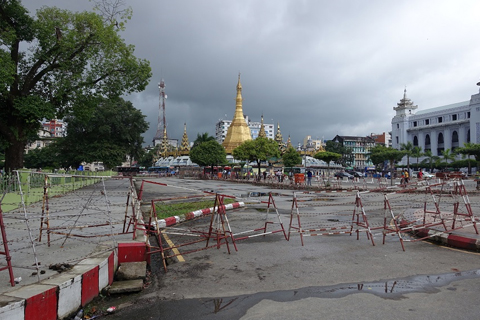