Kyoto, Japan -- An international team of scientists has achieved the milestone of directly observing the long-sought, innermost dusty ring around an accreting supermassive black hole, at a right angle to its emerging jet. Such a structure was thought to exist in the nucleus of galaxies, but had never directly seen without complications from nuclear obscuration. This is now done by achieving the highest spatial resolution in the infrared wavelengths ever done for an extragalactic object. The new discovery was just published in The Astrophysical Journal. 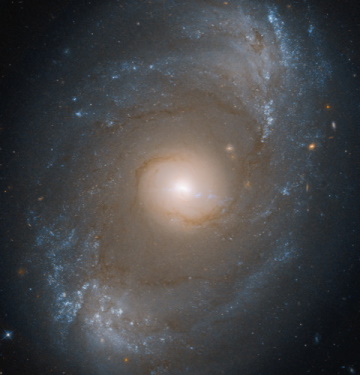 A supermassive black hole is thought to exist at the center of every large galaxy. As material in the surrounding region gets pulled toward the center, the gas is believed to form a hot and bright disk-like structure. In some cases, a jet emerges from the vicinity of the black hole in a direction at a right angle to the disk. However, this flat structure, which is essentially the ‘engine’ of this active supermassive black hole system, has never been directly seen, because it is still too small to be captured by telescopes. One way to approach this key structure is to directly see an outer ‘dusty ring’ -- interstellar gas contains dust grains, solid sand particles made of heavy elements, which can only survive in the outer region where temperature is low enough (< ~1500K - otherwise metals evaporate). The heated dust emits thermal infrared radiation, and thus would look like an outer ring around the black hole, if the central system indeed has a flat structure. The detection of its structure would be a key step to delineate how the central engine works. Attempts to see this structure from edge-on directions is difficult, because the system is obscured by the same dust acting as an absorber of light. Instead, in the new investigation, the team focused on a system with a face-on view, the brightest such object in the nearby universe -- the nucleus of a galaxy called NGC 4151. However, the detection needed a very high spatial resolution in the infrared wavelengths, and at the same time, a large array of telescopes that is laid out suitably to observe objects at different orientations. 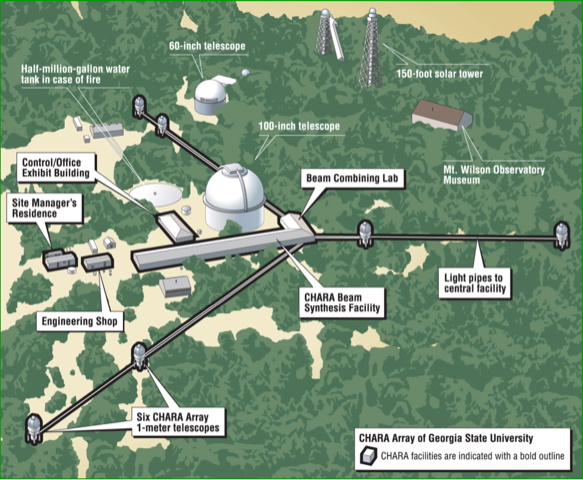 The CHARA Array interferometer in California, USA, is the only facility which meets both of these two requirements. The Array consists of 6 telescopes, each of which has a 1 meter diameter mirror, that are combined to achieve the spatial resolution of a much larger telescope. While each individual telescope is relatively small, the array layout is optimized to observe objects in a variety of angles and with large distances between telescopes. This achieves a very high spatial resolution capability. The CHARA Array actually has the sharpest eyes in the world in infrared wavelengths.

With this CHARA Array, the team finally detected the dusty ring, orthogonal, or at a right angle, to the emerging jet in the center of the galaxy called NGC 4151. “We’ve been hoping to see this structure in a bare nucleus object for a long, long time”, says Makoto Kishimoto, principal investigator of the project at Kyoto Sangyo University. A big boost was that each telescope has recently got a new system called “adaptive optics”. Matt Anderson, postdoctoral researcher at the CHARA Array, says “This greatly increased the injection rate of the light, compensating the relatively small collecting mirror to observe the extragalactic target, which is much fainter than the stellar targets typically observed in our Galaxy.” 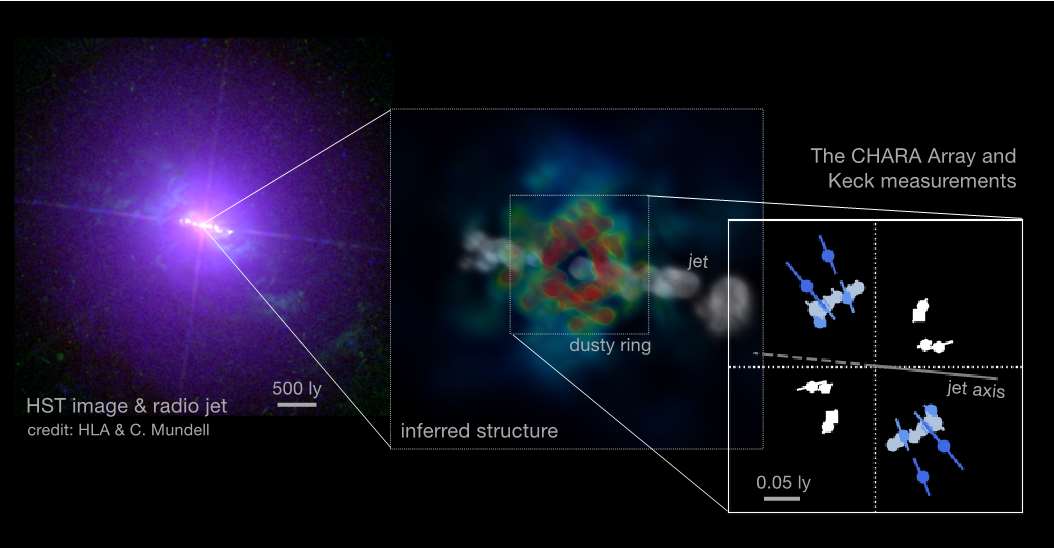 (Left: The central region of the galaxy NGC 4151 (about 3000 light years in diameter). Center: Illustration of the structure inferred for the central 0.5 light years. Right: The results of the CHARA Array and Keck interferometer observations, showing the measured size (with error bars) along different directions with respect to the location of the black hole at the center.)

The role of this dusty ring acting as a light absorber when viewed edge-on is in fact another important aspect of this finding. Researchers in the field have believed that, because of this dusty ring, an accreting supermassive black hole system has the distinction between edge-on and face-on views, with an associated variety of observed properties. Therefore the identification of the key ring has long been sought in a double sense indeed. Furthermore, additional studies have been showing that the structure seen at slightly longer infrared wavelengths, corresponding to an even larger outer region, seems elongated along the jet, and not at a right angle to it. This has been interpreted as an indication for a dusty wind being blown out toward the jet direction. The present finding that the inner structure looks flat and perpendicular to the jet, is an important link to the windy structure and its interaction with the rest of the galaxy surrounding the active black hole system. These groundbreaking observations measured the size and orientation of the dusty ring-like structure. The team is now working to get an even more detailed image of the central region by getting more data. A new, even more sensitive instrument is also being built at the CHARA Array, which will be able to provide data for many other galaxies in the next coming years.

The original article, "The dust sublimation region of the Type 1 AGN NGC4151 at a hundred micro-arcsecond scale as resolved by the CHARA Array interferometer", can be accessed at this link. https://doi.org/10.3847/1538-4357/ac91c4